The incident with the raccoon.

Raccoons love dumpsters, In fact many are killed each year because they get into dumpsters and cannot get out. If you see one in a dumpster and want to help it get out put a piece of lumber in the dumpster with one end on the top of the dumpster and the other end in the bottom of the dumpster, The raccoon will climb out on its own. Dont Try this!!! Raccoons are much stronger that they look, If the business end gets a hold of you they tend to chew on you for a while, and it hurts. An incident prior to this cost me better than $400.00 and Rabies shots!

Back to the story. On August 18th 2004 the raccoon was dumpster diving and the compactor truck showed up, With no way out the raccoon was dumped into the truck along with the trash. He was seen surfing on the compactor truck by many people eating lunch at Morley Plaza in Saginaw Michigan southbound on Washington Ave where he bailed, Crashing through the back of Mr. Bankers car window. He hid under the seat for about an hour while a crowd built near the car.

Thats when they called me, I had to get the little bugger by the tail because the other end was kinda mad. 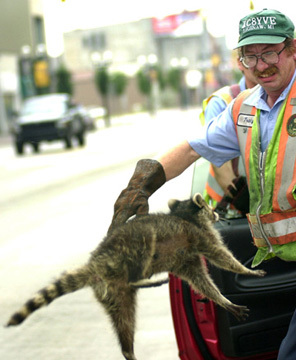 I had Several fears going on at once here, First was the business end of the raccoon, 2nd I had never done this in front of such a large crowd, 3rd News 5 and the Saginaw News was there.

What if I got the little bugger out and he ran out in traffic in front of everyone?

You can tell by the look on my face, who had my attention!

Things worked out, I managed to chase the raccoon toward Morley Plaza, and he spent the evening eating ribs out of the trash and watching the symphony!

I made the Front page of the Saginaw News. Was on News 5, Inside edition, and seen on a european news channel in Spain. The City gave me a pretty piece of paper for helping a citizen in distress. All over a little Ol Raccoon?